Frederick the Great and Washington: Truths, Myths, and Propaganda 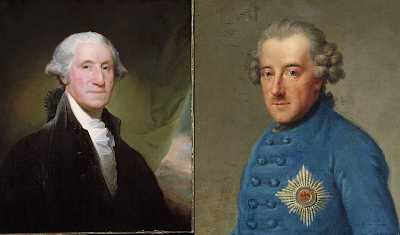 Yesterday, a popular facebook page which commemorates the Revolutionary War in the United States shared an anecdote regarding George Washington and Frederick the Great. Quoting Frank Moore's 1860 publication, Diary of the American Revolution from Newspapers, volume 2, the post related how Frederick II of Prussia presented George Washington with a picture of himself, inscribed, "From the oldest General in Europe, to the greatest general on earth."[1] The anecdote continues at some length, with another Prussian general questioning Frederick's assessment, and Frederick giving a full explanation of why Washington was the greatest general on earth. The source of this anecdote is the August 9th, 1780 issue of the New Jersey Journal.

The trouble is, this anecdote is not true. It never occurred. There are variations of it, sometimes a sword is the present, sometimes it is a portrait.  And the worrying part is, historians have known it wasn't true for over one hundred and twenty years. Paul Leland Haworth, writing an article entitled Frederick the Great and the American Revolution in the American Historical Review in 1904, noted:

At one time a story was widely current, and it is still believed by many, to the effect that he [Frederick] entertained a great admiration for Washington, and that he even went so far as to send him a sword[.] This is one of those historical myths that have been eagerly accepted by a willing and credulous public, and it has been completed exploded.[]

Haworth cites the work of writer Moncure D. Conway, who, writing in 1891, examines the stories of the sword and/or portrait in detail. Conway corresponded with surviving relatives to see if the portrait survived, and notes that other monarchs did send portraiture to Washington, and the records of those transactions (and the portraits themselves) survive to the present day. Conway also describes the way in which Washington carefully gave the provenance of items in his will, and no gifts from Frederick the Great are described in his will.[3] Likewise, Conway notes that Washington's will carefully preserved a sword from Theophilus Alte of Solingen, and passed the sword onto Washington's nephew, George Steptoe Washington.

Conway concludes: "We may feel tolerably certain that no gift was ever sent by Frederick the Great to Washington, and that he never recognized in any remark the greatness of Washington."[4] Now, Washington as a figure was certainly known to Frederick. Indeed, in Frederick memoirs, he notes, "General Washington, who was called at London the chief of the rebels, gained, at the commencement of hostilities, some advantages over the royalists who were assembled near Boston."[5] So, while clearly noting the progress of the American War of Independence, Frederick did not sent Washington fan mail.

If historians have known that this anecdote is false for over one hundred years, why does it get shared 150 times on facebook in the course of a day? This is because like many eighteenth-century anecdotes, true or false, the story of Frederick's portrait/sword is designed to communicate truths to the reader. These truths, that Washington was a inspirational leader who fought from a disadvantageous position, and that he had, "surmounted untold difficulties," were as accurate in 1780 as they remain today.[6] This does not obscure the fact that this newspaper report was a sort of propaganda: in 1780, Frederick II of Prussia was recognized as an authority on warfare. Having him write respectful letters of admiration to Washington would have been an immense public relations victory. As a result, the New Jersey Journal, together with the Providence Gazette, told a story that communicated truths about Washington's skills as a general.

The May 20th story referenced in the Providence Gazette is relatively brief:  it simply provides the inscription. The August 9th New Jersey Journal provides more embellishment, and begins to raise questions in the mind of the reader. How would the author have been privy to the conversation of the King of Prussia and one of his generals regarding Washington's military qualities? These doubts, together with the lack of physical evidence, point to the fact that these stories are myths designed to impart truths, rather than factual occurrences. As a result, they are often more compelling than factual history. Thus, over a hundred years after Frederick's factual statement regarding Washington was disproved, the legend of Frederick's admiration for Washington continues unabated.

You can read three more articles on these myths over on the Boston 1775 blog by J.L. Bell.

If you enjoyed this post, or any of our other posts, please consider liking us on facebook, or following us on twitter. Consider checking out our exclusive content on Patreon. Finally, we are dedicated to keeping Kabinettskriege ad-free. In order to assist with this, please consider supporting us via the donate button in the upper right-hand corner of the page. As always:
Thanks for Reading,