Column Assaults during the Seven Years War: Myth or Reality? 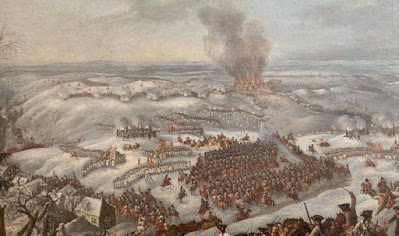 Today, I want to discuss the idea of columnar assaults during the Seven Years War. This is a somewhat controversial topic, as it is usually asserted that attacks by columns were not a feature of the Seven Years War period, but only appeared with the advent of Revolutionary/Napoleonic Warfare. There is no question: during this later period, troops used a greater variety of column formations at the battalion, regimental, and division level.  However, this post demonstrates that the Austrians did attack in columnar formations during the Seven Years War. These formations were not only "march formations" which took the unit to the battlefield, but used within musket range of the enemy troops.

This post does not look at the most often cited example of a attack in column during the Seven Years War: the abortive French infantry attack at Rossbach. This is a clearly unintentional use of the column, born out of dire necessity. Likewise, I do not tap into the extensive theoretical debate regarding the use of columns from Folard on. Rather, in this post, I look at battles where the commanders made a conscious decision to engage enemy forces, whether in column or not.  At the battles of Moys, Hochkirch, Maxen, and Landeshut, the Austrians used a variety of successive linear and column formations in order to approach and attack the enemy positions.[1] At Adelsbach, the Prussians did the same. In each of these situations, circumstances and the terrain conspired to make attacking in a deep formation the most effective way of combating the enemy.  At Moys, Hochkirch, and Maxen, the Austrians attacked on a battalion frontage: what we might call battalion columns, or successive linear waves. At Landeshut, a single Austrian Grenadier battalion attacked in a column of companies. At Adelsbach, the terrain forced the Prussian troops to approach the enemy position in a column.

At Moys in 1757, Christopher Duffy has clearly demonstrated that the Austrians employed a successive linear attack.[2] The Austrians arrayed their battalions in seven "columns" of three battalions each, separated by 100 yards. Within each "column" the battalions had 200 yard intervals between them. This allowed for flexibility, as the orders explained: "if a first-line battalion suffers heavy losses, or falls into disorder, we will file it off to the left or right, and replace it with the battalion behind."[3] This columnar, or successive linear assault would form a model for the Austrians during the war, as they attacked using columns with a battalion frontage again at Hochkirch and Maxen.

At Hochkirch, the novel method of approach and attack meant that different officers had immediate tactical control of sectors of the battlefield, thus, some of the attacking "columns" formed into line of battle earlier, while others persisted in a columnar formation.[4] The Austrian veteran Cognazzio asserts that this was altogether too much to ask of the troops, and that his component division within his battalion was a mongrel force of collected men: "Grenadiers, Fusiliers, Hungarians, and Germans... [I] placed them together in rank and file, and brought the line into being."[5] Cognazzio asserts that in the heat of the fight, flexibility was the only thing that allowed for the creation of a "well-closed line."[6] So, at least in some instances, it seems that the columns of Hochkirch were intended to deliver men to the area of action, rather than a formation by which to actually conduct an attack.

At Maxen in 1759, the situation is rather different. Here, the depth of the "battalion columns" of the Austrians was significantly increased to twelve battalions. Led to the attack by the grenadiers of the army, two Austrian battalion columns approached the enemy positions. The Austrian official report cites that they were greatly supported by an artillery bombardment, and seeing that: "Such a swift, sustained, and well-placed fire had caused great damage to the enemy lines, and that they were beginning to waver, the assault was allowed to go forward. It happened that the infantry were in battalion columns."[7] The same source continues, asserting that the battalion columns were not formed into a wider battle line until the Prussian position on the heights was broken.[8]
Historians should use visual sources, even those painted closely after events, with extreme care when reconstructing battles. The Attack at Maxen, painted immediately after the battle by Franz Paul Findenigg, displays some features worthy of note. First: Findenigg correctly identifies the first two battalions approaching the Prussians as grenadiers (they have peaked caps, and carry no flags, while the other battalions all carry flags and wear cocked hats).  Findenigg also depicts the action of the battery disrupting the Prussians, as well as Austrian battalions in a "succcessive line" or "battalion column" formation, stacked several units deep. The individual battalions of the column seem much closer than the guidelines of the attack at Moys, perhaps supporting Christopher Duffy's assertion that "Austrian column[s] of assault" were formed in a dense closed-up formation.[9] We should not put too much weight on this visual evidence. Thus, while presenting the same issues as other visual sources, Findenigg's painting, at least, seems to support the idea that the Austrians made their initial breakthrough of the Prussian line using this formation.

At Landeshut in 1760, we find something rather different. Here, two Grenadier battalions led the attack on Prussian fixed positions on the Mummelberg and Buchberg. The grenadier battalion of Major de Vins employed a column of companies for this assault. [10] Having taken these two positions and been returned to order, a larger force of infantry now combined into two "columns" and launched an, "assault of columns" against the Prussian position on the Kirchberg. As opposed to a column of companies, this attack, especially considering the way it is depicted on the map (three lines) was likely a successive linear wave attack as at Moys.[11]
The Prussian use of columns in the attack at Adelsbach on July 6th 1762 appears to have been largely unintentional. Attempting to get at the Austrian position, the Prussians had to march down a valley, through Ober Adelsbach, over the stream, and back up a valley to the heights where the Austrians were waiting for them. As a result, they were unable to properly form for the attack, and came on in some sort of marching column, likely of open platoons. The Prince de Ligne noted that the Prussians were marching to the attack, "dû défilér," indicating a formation narrower than a line.[12]  Upon reaching the height, however they attempted form a more traditional battle line. [13] This is was not, therefore, an intentional attack in a column, but one mandated by the terrain.
Conclusions
In the Seven Years War, then you have a variety of columnar attacks. In order to assist with visualization, I have snapped some photos below. These attacks are made with a variety of successive linear or column formations. The first employed, and most clearly described is the attack a "column" of three battalions deployed in line, with significant intervals.
Second, we have the assault in battalion columns, as happened at Maxen. Intervals are still present, though intentionally or unintentionally, they have been reduced.
Third, we have the single battalion attacking in a column of companies, as at Landeshut.  This attack was likely designed to take a fixed position.
Last, and honestly least, we have the bumbling and unintentional attack by marching columns, as occurred at Adelsbach.
Thus, during the Seven Years War, the Austrian army did attack in a columnar formation. These attacks were less varied, less coordinated, and more ad-hoc than later Revolutionary and Napoleonic attacks in column.  Despite this, the evidence is clear: the Austrians did indeed innovate with alternative linear and columnar attacks during the Seven Years War, not just in theory, but actually on the battlefield. This may have been unintentional: a feature of the novel Austrian grand tactics of the time. Innovation is sometimes unintentional.  By the time the Seven Years War had ended, the Austrians had attacked in successive linear waves, columns of battalions, and a battalion column of companies.
If you enjoyed this post, or any of our other posts, please consider liking us on facebook, or following us on twitter. Consider checking out our exclusive content on Patreon. Finally, we are dedicated to keeping Kabinettskriege ad-free. In order to assist with this, please consider supporting us via the donate button in the upper right-hand corner of the page. As always:
Thanks for Reading,