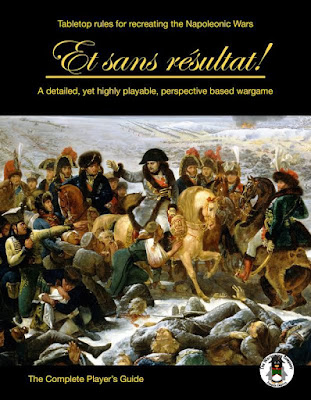 
What is a wargame? To some, it is a game, a way to see friends, roll dice, and enjoy a fun competition. To some, it is a simulation, scientifically calculated in a detailed manner as possible. For others, it is a way to connect with a particular period of the past, carefully reproducing uniforms and weapons in miniature. All this to say, wargaming is not one thing, it is many things. It is as much art as science, and as the recent passing of my friend Dean William West has reminded, art can be lost if it is not passed on and remembered.

Today, we are going to examine a particular ruleset, David Enteness'  Et sans résultat!, published by The Wargaming Company, LLC. You can find this product at The Wargaming Company website, and the UK and EU at Magister Militum. David is  attempting to follow the Flames of War/Games Workshop model of wargaming in the Napoleonic Era, in order to make this era more accessible to younger gamers. We here at Kabinettskriege wish him all the success in the world in that regard.

ESR (Et sans résultat!) is a rather unique wargaming platform, as it eschews much of the tactical level simulated detail in order to place the player specifically at the level of the division, corps, and army commander. It is thus, as it claims on the front cover, a "highly playable, perspective based wargame." Before evaluating ESR too carefully, I want to discuss the format of the ruleset, and then move from there into critiques and praise.


The image above is the 150-yard scale quick reference guide. It gives a breakdown of the turn, and also gives you an idea of the high quality production value which goes into ESR products. Each turn is broken down into the Command, Movement, Artillery & Skirmish, and Combat phases.

Once these order have been issued, there are dice rolls to activate them on the following turn, and orders may be delayed a few turns. Leader Actions allow the player to personally intervene with a number of special actions, such as committing an artillery battery, creating a detachment, or taking personal command of a body of troops. All of these are achieved by a dice roll which is relatively easy at the beginning of the game, but becomes increasingly difficult as formations take damage (or Fatigue, to use the ESR specific term.)


The Movement phase is obviously when movement occurs, but also when formations ploy and deploy. During the phase, the steps are Order Conversions, Movement, Ploy and Deploy, and Fatigue Recovery. Order conversions allow certain types of troops to launch fast attacks. Deployment is a very critical part of the game, as all formations usually begin ployed, or in a column of march. It takes time and effort to deploy troops for battle, (as it did historically!) and a division can usually deploy about 3-4 battalions per turn, or twenty minutes.  Formations which are attacked while ployed suffer a severe disadvantage, and will usually retreat. Fatigue Recovery is when troops shed Fatigue and become more combat effective.

The Artillery & Skirmish is the first of two battle-related phases. The phase consists of  Artillery & Skirmishing, Leader Fate, and Assessments. In this phase, forrmations can bombard and skirmish with one another, attempting to inflict Fatigue (damage) and Assessments (morale checks) on the enemy. Factors such as the types of guns firing, weather, and intensity of the assault influence the Artillery phase, while the skirmish phase is impacted by whether or not your army possesses an effective skirmishing doctrine. This is also the phase of the game where "officer casualties" are resolved, during the Leader Fate segment.


During the Combat Phase, brigades and divisions battle one another for control of the field. Compared with many rulesets, combat is streamlined, consisting of numerous opposed 2d6 rolls with modifiers added. For example, if a battalion of Landwehr was opposed to the Middle Guard Infantry, the French would add 6 to their dice, and the Prussians would add 3 to theirs. This is also impacted by the quality of commanders. An exceptionally good division commander might allow you to add 3, an average one might allow you to add 1. The goal is to beat your enemy by greater than 4, allowing you to breakthrough further into his formation. After combat, the formations who took part perform an assessment, once again a 2d6 roll which can result in the formation taking Fatigue, retreating, or breaking in a rout.

I will close out this review with a bit of analysis, describing features which players may or may not enjoy regarding the game, and then evaluating it as a historian. This basic maneuver units are the battalion/regiment and squadron. Units of that size are represented on a single base, or stand. The ruleset is designed for fast play and large armies. If you want to wargame the Napoleonic Era on a large scale, seriously consider this ruleset. Battles of 20,000-30,000 men per side routinely take 3 hours. It is possible to game larger battles in a reasonable amount of time, something that is usually not offered by highly detailed, simulation-type wargames. It is quite possible to be charged by a division of French Cuirassier, and resolve their charge in real time.


In order to achieve this quick-play time, ESR dispenses with much tactical detail. Indeed, this is almost a wargame set at the operational level. Battalions fight, but do so in base contact. Hussar squadrons make take an enemy regiment in the flank, but receive no bonus for doing so, unless not just the squadron, but the whole maneuver element outflanks the enemy. In example: a Polish Uhlan Squadron charging a Russian infantry battalion on the flank would receive no bonus, while a French Cuirassier division charging a Russian infantry division on the flank would. There are absolutely tactical aspects to the game (deploying batteries, launching intense skirmish assaults) but focusing on them misses the point of the game. Your goal is not to destroy the three enemy regiments in your front, your goal is to push back the three enemy Corps in your front. I was initially rather horrified by this idea: after all, wrecking enemy battalions is one of the more enjoyable aspects of games such as Johnny Reb III, Final Argument of Kings, and Warfare in the Age of Reason. It isn't the goal in ESR, and ESR makes no bones about that fact.

As a historian, I find ESR to be a breath of fresh air. The ESR Campaign Guides come with selections for further reading, it would be interesting to see that included in future versions of the ruleset as well. It is clear that David has done a great deal of research into this era of history. ESR has carefully identified what it was possible (and not possible!) for commanders to do on Napoleonic battlefields. The game does what all wargames should try to do: present the player with the role of a commanding officer in that era. If you want to discover what it was like to be in the 21eme regiment d'infanterie de ligne, go be a reenactor, or even better, read the extensive literature on common soldiers which has grown up on the Napoleonic era. If you want to be faced with some of the choices which plagued Napoleonic commanders on the battlefield, try ESR.


If you enjoyed this post, or any of our other posts, please consider liking us on facebook,  or following us on twitter. Finally, we are dedicated to keeping Kabinettskriege ad-free. In order to assist with this, please consider supporting us via the donate button in the upper right-hand corner of the page. As always: